The Council of Ontario Construction Associations honoured construction industry leaders from across Ontario with the presentation of the Cliff Bulmer Award, the Construction Hard Hat Special Achievement Award, the Chair’s Award, the President’s Award and Association Milestone Awards recently.  These recognitions, normally presented in conjunction with COCA’s Annual General Meeting in February, were made at a special awards ceremony and dinner held at The Sheraton on the Falls Hotel in Niagara Falls Ontario on the evening of June 11th.

In addition to award recipients, special guests in attendance included David Piccini, MPP for Northumberland-Peterborough South who brought greetings on behalf of the government and Canadian Construction Association President Mary van Buren who welcomed guests on behalf of the CCA. 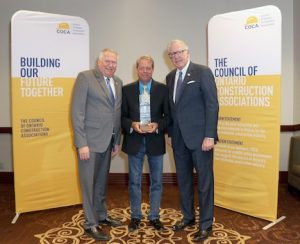 COCA’s highest honour, the Cliff Bulmer Award which recognizes an individual who has made an outstanding contribution in furthering the relationship between the construction industry and the Ontario Government was awarded to Paul Gunning of the Acoustical Association of Ontario for his leadership of COCA’s WSIB-OH&S Committee and his contributions to numerous COCA submissions to government.

COCA’s Industry Ally Award is presented to an individual outside of the COCA federation who has made a significant contribution to the success of the construction industry or who has contributed to improvements to the industry environment in Ontario.  This year’s Industry Ally Award was presented to Gail Smyth.  Up until her retirement as President & CEO of Skills Ontario in December 2017, Gail was the province’s leading promoter of careers in the skilled trades for more than 20 years and successfully steered thousands of young people into careers in the construction industry.

Hard Hat Awards of Construction Excellence for exemplary contributions to the construction industry over a period of many years were presented to:

Chair’s Awards, given at the discretion of the COCA Chair to individuals who have gone above and beyond the call of duty in their contributions to the success of our provincial federation were presented by Chair Steve Dietrich to Roger Hubbard of AMJ Enterprises and the Reinforcing Steel Institute of Canada and to Harold Lindstrom of the Construction Association of Thunder Bay.

Association Milestone Awards were presented to: